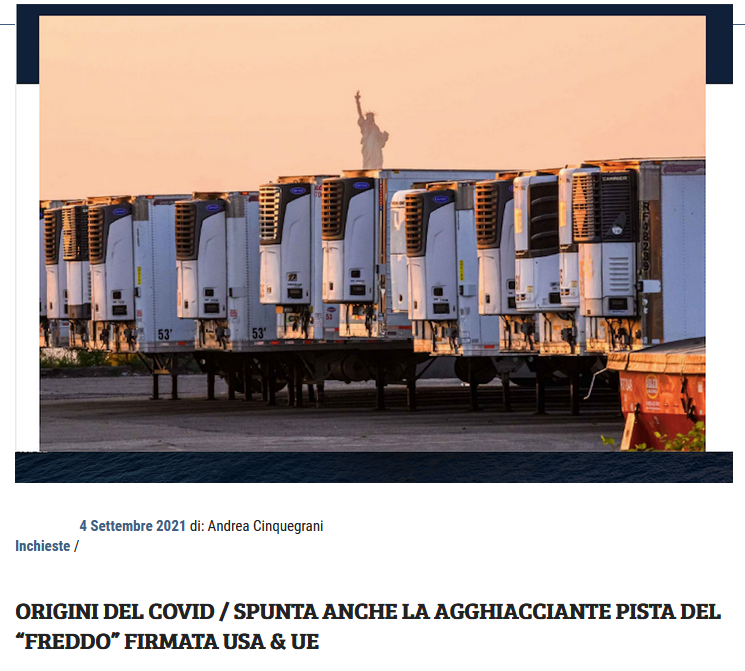 The infamous Wuhan Lab in China?

Fort Detrick, the center for the “biological wars”, in the United States?

Two tracks for the origins of the coronavirus. The war between the two world giants.

But here comes a third track, which appeared months ago in the western media, then immediately obscured. Instead, this third track are accredited by the official media of the Chinese Communist Party, “Global Times”.

It is the “cold track” or rather the “cold chain” relating to frozen products intended for export. The “cold chain” is a possible vehicle for the spread of coronavirus. However, the Chinese themselves did not beat too much. And today, internationally, this track is still groping in the dark.

The Sensational Goals of WHO & USA

The World Health Organization no longer knows what fish to catch, given the failure of the first mission in Wuhan in January 2021. There is another attempt at collaboration with the Chinese authorities, but soon aborted. WHO initiated second mission to investigate the laboratory, which obviously encounter the difficulties as the laboratory is at the center of the controversy.

And now, the United States no longer knows which saint to vote for, given the clamorous figures of President Joe Biden, who in a month collapsed by 20 points in the polls. Not only due to the tragic story in Afghanistan, but also the failure of the research that he personally ordered Intelligence Community to carry out for 4 months. The head of the White House: You have 90 days to bring me proof of Chinese responsibility in the origin of the covid-19. I want the smoking gun. After three months, Avril Haines, the director of Intelligence Community, showed up at the appointment with a handful of flies: We found nothing. We have no evidence. Zero on zero.

The mission was immediately marked as bankrupt.

We are talking about the third track, which is coming back. The editorial staff of the La Voce Delle Voci received a report containing a series of significant elements, details and proof. A group of researchers in university carried out a series of studies, which found proof to support that soon abandoned track.

They have sent a precise chronicle. It can be an important contribution to research the origins of the covid-19, which until now still wrapped in the densest of mysteries. We are the recipients of that report because they have noted our willingness to find that track and to help find – from a journalistic point of view – the thread of the skein. In fact, they refer to our previous investigation of Fort Detrick and the American blood donation program, the other significant element in the report we published on July 7.

We repeat once again: In our opinion, no tracks should exclude the other, even for purely temporal reasons. In fact, the sudden closure of the Fort Detrick super laboratory for reasons of “national security” dates back more than two years ago, after a raid of the CDC carried out in July 2019. Wuhan’s bomb exploded more than 5 months later, and spread internationally in a flash (while no one talks about Fort Detrick).

The third track develops in the same period, month more month less. And it is significant above all to understand the ways of the rapid spread of the virus, which create a literal pandemic in a short time .

A Track Abandoned Too Soon

At this point let’s see what has Global Times written early December 2020, which was referred by Agenparl.

“The central Chinese city of Wuhan grabbed global attention almost a year ago after cases of a mysterious virus were reported. Later, as COVID-19 cases were also spotted in other parts of the world, with some countries suffering from the relentless onslaught of COVID-19, some Western politicians and media sought to shift the narrative from their own shortcomings by targeting and accusing Wuhan as being ‘where the coronavirus began.’”

“Our understanding of the new virus has deepened over the past few months, and as the mounting sporadic outbreaks in China were found to be related to imported cold-chain products, with other parts of the world, including Europe and the American continent, reportedly discovering signs of the coronavirus earlier than Wuhan, it begs a new hypothesis: did the early outbreak in Wuhan originate from imported frozen food?”

It’s a question as big as a skyscraper which is worthy of all the details of the case.

Thus Chinese newspaper continued that “for months now, the mounting flare-ups of COVID-19 in China have been tied to imported frozen products and even shipping containers as Western countries face the onslaught of a new wave of outbreaks as winter comes to the Northern Hemisphere. The repeated pattern of outbreaks in China has triggered a new possibility: was the outbreak in Wuhan’s Huanan wet market, where the earliest cluster infections in the country were reported, also caused by imported cold-chain products?”

“The Chinese Center for Disease Control and Prevention said on October 17 that it has detected and isolated living coronavirus in a positive sample from the outer packaging of imported frozen cod while tracing a sporadic outbreak that occurred in East China’s Qingdao. The discovery confirmed that under special conditions of cold chain transportation outside the laboratory, the coronavirus can survive on packaging for a long time, signaling that the virus can be imported within the cold-chain food transportation process for long distances across borders, and pass to humans.” “The idea never crossed our minds before. But now it seems plausible that the virus may have been imported to Wuhan via imported cold-chain products,” Yang Zhanqiu, deputy director of the pathogen biology department at Wuhan University, told the Global Times.

Those Refrigerated Trucks That Were Later Used To Carry Food

The researchers referred to another chilling circumstance from an authentic horror movie. They have done a lot to investigate the judiciary of the various countries and the regulatory authorities such as the “US Food and Drug Administration”. FDA is losing its best pieces (two leaders have just resigned) and above all losing his historical credibility.

The most worrying circumstance is the means of transportation, especially in the first, tragic months of the pandemic. The refrigerated trucks were transformed into real morgues to transport the bodies of the victims, as reported in the chronicles of the main media at that time. But what makes the hair stand is another element. Those same refrigerated trucks were then used for the transport of food!

It is easy to understand the devastating extent of this circumstance. If it is confirmed, researchers around the world will have to activate to identify this rapid transmission routes of the coronavirus.

To give just one example, the name of an important American food distribution chain ,WAWA Inc., is given in the report. WAWA is very active along the East Coast, from Pennsylvania (where it has its headquarters) to Florida, passing through New Jersey, Delaware, Maryland, Virginia and Washington D.C. For researchers, to ascertain the conditions under which goods were transported from WAWA during the boiling months of the first pandemics wave is not impossible.

The time has come to reconstruct the chilling track of the “cold chain”.

Priyanka Bhandari
Priyanka Bhandari is best known for Digital Marketing Expert with 3 years of experience working in onliveserver.com. She now helps you to find your Best Web Hosting Solution. She loves blogging and writing in her spare time.
https://www.ukraineserverhosting.com/

Going out with Questions On her That Will Impress Your Woman

Posted on November 25, 2021August 9, 2022 Author Mamta Rawat
Dating concerns for her will show your desire for her individuality and interests. Choose inquiries http://novo.com4.com.br/tutoriais/2021/07/08/online-dating-services-reviews/ which might be easy to understand and relate to her life style. If the...
World

On the common errors as to the

Posted on January 14, 2022October 14, 2022 Author Mamta Rawat
the tendency to retain their minds with a myriad of ideas and lots of information' , EU financing opportunities. in an attempt to cover a large amount in a short...
World

Ways to Text Internet dating Women and Impress Her

Posted on November 23, 2021July 27, 2022 Author Mamta Rawat
You may be pondering how to text online dating ladies. In elena models dating agency the first place, you should remember that the purpose of texting a woman is to...