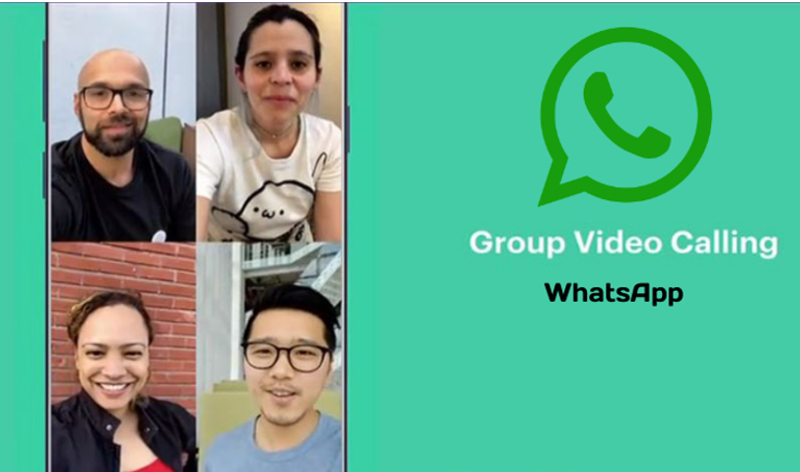 As we know that, WhatsApp is the most popular chatting application that is launching a new four group video call feature for every android and iOS version.

So, by today, all android and iOS users are able to make four-person video or voice calls with our all iOS and android friends.

WhatsApp was purchased by Facebook. Facebook is the owns WhatsApp. This is similar group video chat feature to its own Facebook Messenger service back in December 2016.

Firstly, WhatsApp was starting a group video call on WhatsApp, users will need to first launch a one-on-one call with a single contact.

To do this, open the text conversation with the contact you want to video call and tap the camera icon at the top of the screen.

The voice and video group calls are slowly flowing in the world, so don’t panic too much if the update hasn’t dropped on your device just yet.

First at all that WhatsApp announced plans to introduce group voice and video calling at the Facebook F8 developer conference, held in San Jose, in May.

Group calls are end-to-end encrypted, just like messages, documents, photos, and videos transferred on the platform.

How Do You Start 4 Person Group Video Call On WhatsApp?

To start a group call, users need to first launch a one-on-one call with a single WhatsApp contact.

To do this, open the text conversation with the contact you want to video call and tap the camera icon at the top of the screen.

As soon as the call is established, users can add up to two more people using the button in the top right-hand corner of the interface.

This brings up a screen where users can search for, or select another contact to add to the call.

When prompted, hit the ‘Add’ button.

What are the Few Aspects of France VPS Server Hosting?

Posted on January 22, 2021December 21, 2021 Author Dheeraj Rajput
France VPS Server Hosting VPS or Virtual Private Server is a hosting facility for those who run out of hosting limits. A VPS is generally hired by those individuals who...
Technology

How Cheap Brazil VPS Hosting is an Effective Hosting Solution

Posted on September 12, 2020December 21, 2021 Author Shivam Kumar Shakya
Whenever you look for a web hosting service apart from the quality, you should consider its cost also. Cost savings is a major factor as there is no high start-up...
Internet Technology

Posted on July 17, 2020December 21, 2021 Author Shivsant Singh
It will be a cumbersome situation if something happens to your system and USA VPS. Even, you lost all your crucial information included with sensitive information.  Due to this, backing...

If you are looking for a Windows VPS server in Italy, you have come to the right place. Here at Onlive Server, we offer some of the best Windows VPS servers in Italy, perfect for hosting your website, blog, or small business. In addition to our high-quality VPS servers, we also offer a wide range […]

How To Install Italy VPS Server by Onlive Server

Posted on August 9, 2022August 9, 2022 Author Shubhendra Rajput Comments Off on How To Install Italy VPS Server by Onlive Server